To charge your battery; insert the battery into a quad battery charger, a single dock, a multidock or attach external power to your Intermec CN3 with the battery installed.

When you remove the battery from the Intermec CN3, an internal super-capacitor maintains your status, memory and real time clock for up to five minutes. To maximize this time, suspend the CN3 before changing the battery.

To remove and install the battery

A quick way to check the status of your battery is to look at the battery icon in the Intermec CN3 Status bar. 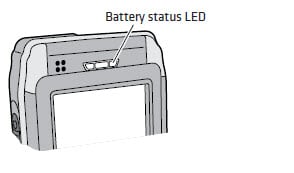